To share your memory on the wall of Margaret Fearon, sign in using one of the following options:

Peacefully falling asleep to the Lord, surrounded by her family after a short battle with cancer at Juravinski Hospital in Hamilton, on Thursday January 9, 2020 at the age of 57. Read More
Marguerite “Margaret” Irene Fearon (nee Babiarz)

Peacefully falling asleep to the Lord, surrounded by her family after a short battle with cancer at Juravinski Hospital in Hamilton, on Thursday January 9, 2020 at the age of 57.

Margaret was a fun and loving person that always put her family and friends ahead of herself. Margaret loved her job at Burlington Springs Golf and Country Club working for Brad, Debbie, and Marty. As part of the hospitality team Margaret met so many people that over the years became such great friends. Over the last few years Margaret got to travel to so many places along with her friend Mary, her brothers Rick and Marion, sister-in-law's Diana and Colleen, and her husband Mark. Margaret enjoyed playing golf so much with her friends, but most of all with her husband Mark.

Life will never be the same without her.

As per her wishes, Private Cremation has taken place. A Visitation will be held at SMITH’S FUNERAL HOME, 1167 Guelph Line (one stoplight north of QEW), BURLINGTON, 905-632-3333, on Thursday, January 16, 2020 from 5-8pm. A Memorial Mass will be celebrated at St. Gabriel Roman Catholic Church (2261 Parkway Drive, Burlington), on Friday, January 17, 2020 at 11:00am. Urn Enichement will take place at Burlington Memorial Gardens Cemetery. In lieu of flowers, as an expression of sympathy, donations in memory of Margaret to Juravinski Cancer Centre or ICU, Burlington Humane Society or The Carpenter Hospice would be sincerely appreciated by the family.

Receive notifications about information and event scheduling for Margaret

We encourage you to share your most beloved memories of Margaret here, so that the family and other loved ones can always see it. You can upload cherished photographs, or share your favorite stories, and can even comment on those shared by others.

I’m Margaret’s cousin Janina, also known as Jane. I stand here with a broken heart.
It is such a time of grief especially for Mark, husband of 35 years, her 2 boys Nick and Josh that she loved so dearly , brothers Rick, George, Marian, and Reggie. Her two sister-in-laws Diane and Colleen, nieces and nephews Jenny, Ricky, Matthew, Bradley, Ryan, Onya, and Ethan, and family and friends.
My aunt Tekla wanted a girl so, so badly and after 4 boys she finally had her wish. A girl born January 6th, 1963.
What joy for parents Tekla and Joe, a beautiful daughter with big brown eyes, and dark brown hair.
Being a baby sister to four energetic older brothers, and a part of a musical family, Margaret learned the love for sports, and music. She had a beautiful voice and loved to sing at a very young age. She sang at her parents’ 25th wedding anniversary, and she played trumpet in her high school band.
She was playing her favorite songs and sang along with them.
Through her brothers, the love for sports continued. Her favorite teams were the Toronto Maple Leafs, and the Hamilton Tiger Cats. She loved to play golf with friends, brothers, sister-in-laws, but most of all with her husband Mark. She even worked at the Burlington Golf and Country Club.
She had a passion for gardening, grew her own herbs, vegetables, and loved her flowers.
As her boys got older and more independent, Margaret did a lot of traveling with family or friends. For her 50th birthday, she traveled to Poland with Rick and Diane for a family wedding, meeting extended family members, and discovering family roots.

Just last October, they traveled South to celebrate their 35th wedding anniversary, along with Rick, Diane, Marian, and Colleen.
Margaret was very close to her siblings, nieces and nephews, and enjoyed spending time together. Her greatest love were her two sons Nick and Josh. She loved them dearly, and was so proud of them.

When Margaret was little her brothers looked after her. After their parents passed, Margaret took on the role of mother, looking after the boys, and kept them in line.
She organized family gatherings, and kept family traditions. She was the glue, for the closeness the family shared. Margaret was the main chef when it was time to organize the making of pierogis for Christmas Eve celebrations. Everyone had to help.
She also held the secret recipe for the delicious mushroom soup. Last Christmas from her hospital bed she had to instruct the boys including Reg, how to make that delicious mushroom soup. Josh was the star pupil, making a lot of healthy meals and drinks for his mom
So how did Mark and Margaret meet?
Mark moved from Quebec to live with relatives in Burlington. They happened to live on the same street Margaret lived on. Through the boys playing street hockey, Mark met Reggie, Margaret’s youngest brother. Reggie and Mark quickly became best friends, and that’s how he met beautiful Margaret. Mesmerized by Margaret’s beautiful brown eyes and bright smile, it was love at first sight for Mark.
But Margaret played hard to get, making Mark work hard to win her heart. As time went by, he joined the Babiarz’s family circle, attending parties and family gatherings, and eventually he won Margaret’s heart.

At the young ages of 21 and 23, they married in July 1984. I had the honor to be one of the bridesmaids, to witness two soul mates exchange their wedding vows.
A promise to love and cherish, in sickness and in health, till death part us. Mark kept that promise last November when Margaret was diagnosed with cancer. Mark accompanied her to all the tests and doctors’ visits as this horrible disease progressed so quickly, Margaret had to be hospitalized before Christmas and then again just before the New Year. Mark was at her side day and night keeping her comfortable, and not leaving her to be alone till her last breath. What love and devotion!
To the love of Marks life, and the love in our hearts, we say our goodbyes. But….. Margaret in our hearts, you will live forever!

Posted Jan 16, 2020 at 09:34pm
I am reading all the tributes to you Margaret and they all ring so true to who you are to me, you and Mark invited me and my children into your fold when I started dating Richard. I have always remembered how welcome and like family we felt. Your smile was endless. Thank You. You will be missed by all who were blessed to know you. Fly high sweet lady. Richard and Lynne Guignard
Comment Share
Share via:
DS

Posted Jan 16, 2020 at 08:13pm
My deepest condolences. I'm grateful to have worked with Margaret for several years at Burlington Springs. She was an amazing person, always smiling and laughing and talking about how much she loved her family. Margaret will be missed dearly and the Springs will not be the same without her.
Comment Share
Share via:
L

Posted Jan 16, 2020 at 06:14pm
So very sorry to hear about Margaret's passing. You are in our thoughts and prayers.
Bill and Linda Jeffries
Comment Share
Share via:
MP 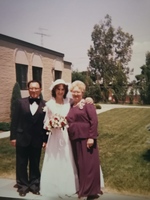 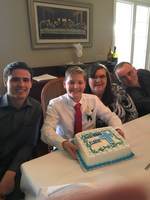 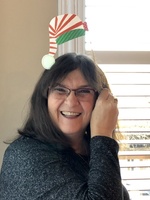