To share your memory on the wall of John Christie, sign in using one of the following options:

Provide comfort for the family of John Christie with a meaningful gesture of sympathy.

John is survived by his wife of over 50 years Phyllis (nee Locke) Christie and his children Deborah (Alex), Richard and Jeffrey (Antonia). John was a devoted “Poppy” to seven grandchildren who were an important part of his life. Daniel, Matthew, Brooklynne, Jessica, William, Olivia and Jonathan will all miss their Poppy dearly. He is also survived by his brother Ernest Christie (the late Jenny) and many nieces and nephews. He will be sincerely missed by sister-in-law Nadine Nikita and her husband Mike as well as his niece Stephanie and nephew Ryan. He will be dearly missed by his sister-in-law Catharina “Tina” Christie (late Alphonse) of Fredericton, NB. Predeceased by brothers Richard (Mina), James (Noella); sisters Macrena (Alfred), Marion (Rheal), Florida (Theophus “Boy”) and Isabel (Jack).

John was an Ironworker by trade and proud member of Local 721 in Toronto for over 50 years. In his youth he was an amateur boxer in New Brunswick. In his later years he enjoyed hunting, golfing, sailing, and spending time with his grandchildren. He was an avid sports fan and loved to watch the Toronto Maple Leafs, Blue Jays and Raptors.

Posted Oct 09, 2019 at 08:59am
My lasting memory of Mr. Christie (I never called him Tommy in fear of getting my ears boxed) was his wild laughter and toothy grin. He was a genuine East Coaster proud of his hometown of Bathurst, always pronounced by him as ‘Bat-terst’. I loved how he always stole the occasional smoke and his love for bacon sandwiches was only surpassed by the love he had for his grandchildren. He’ll be sorely missed by all who knew him.
Comment Share
Share via: 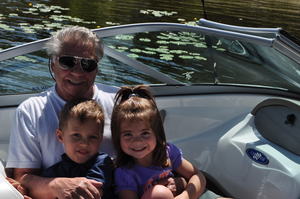