To share your memory on the wall of James Stephen "Steve" Doherty, sign in using one of the following options:

Provide comfort for the family of James Stephen "Steve" Doherty with a meaningful gesture of sympathy.

Visitation will be held at Smith’s Funeral Home, 1167 Guelph Line, Burlington 905-632-3333, on Sunday, September 29, 2019 from 3-5 and 7-9 p.m. Vigil prayers at 8:30 p.m. Funeral Mass will be celebrated at St. Patrick’s Roman Catholic Church, 196 Kenwood Ave., Burlington on Monday, September 30, 2019 at 11 am. Reception to follow. Private family inurnment, Holy Sepulchre Cemetery. In lieu of flowers, those wishing to make a donation in memory of Steve are asked to please consider St. Vincent de Paul or The Carpenter Hospice. Special thanks goes out to the staff at 7S Joseph Brant, Birchtree Family Medicine and the support of LHIN.
Read Less

We encourage you to share your most beloved memories of James Stephen "Steve" here, so that the family and other loved ones can always see it. You can upload cherished photographs, or share your favorite stories, and can even comment on those shared by others.

Posted Sep 29, 2019 at 08:00am
We are so sad to hear of Steve's passing. He was a wonderful human being; so kind, thoughtful, always with a smile and a good story to tell. We met Steve up at Sand Lake camping and cottaging and he introduced us to the Harvest Stew. Steve would set up a cauldron over an open fire and cook up beef , broth and onions. All of the guests had to bring a vegetable to add to the pot. We so enjoyed this autumn get-together of friends and family. I hope this is a tradition you'll carry on.
We miss Steve and will remember him always. Our hearts go out to all the family.
Much love, Janet, Dan & Katie
Comment Share
Share via:
SD

Posted Sep 28, 2019 at 03:27pm
Bridget , it was with great sadness that I learned of Stephen’s death this morning from Aedammair and Kevin. My deepest sympathy to you Colleen, Catherine, Patricia and their family’s. It was lovely to be in contact with him for the past few years. My family and I will remember him and all of you at Mass tomorrow. Sally Dunleavy. Mayo.
Comment Share
Share via:
TF

Posted Sep 27, 2019 at 10:28pm
My sincere condolences to all of you! I have many sweet memories of “Mr. Doherty’s” story telling and welcoming nature...always happy to see you with a twinkle in his eye! I hope that you find comfort in all the specials memories held close to your heart! Favy
Comment Share
Share via:
JK

Posted Sep 27, 2019 at 07:41pm
Cathy & the entire Doherty clan, my thoughts an prayers are will you all during this difficult time.
My God shine his light down upon you all and give you strength and peace.
Mr. Doherty was a wonderful soul, with a great sense of humour who loved is Irish upbringing
Unfortunately I will not be able to make either the visitation or funeral but know you with me close in my prayers - Karczie
Comment Share
Share via: 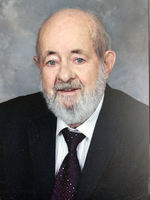