To share your memory on the wall of Gunther Cusolle , sign in using one of the following options:

Provide comfort for the family of Gunther Cusolle with a meaningful gesture of sympathy.

Born in Vienna, Austria he was the son of the late Ludwig and Felizitas "Susie" (née Hubel) Cusolle.

Partial Jewish ancestry meant that Gunther spent the first years of his life at constant risk of Nazi incarceration. In the early 1950’s he made an uncomfortable immigration to Canada starting at a refugee camp in Germany, enduring seasickness all the way to Nova Scotia, before finally settling in Kensington Market in Toronto.

Gunther loved gardening, tennis, skiing, golf, home improvement and fiddling with anything mechanical or electrical. He worked for most of his career as a product engineer with Inglis/Whirlpool, and, after retirement, volunteered at Habitat for Humanity, while also discovering a passion for researching his family genealogy. In his later years, he successfully battled health issues and multiple hospital stays, eventually regaining the active lifestyle he cherished.

A Celebration of Life was held on October 5, 2019 in Burlington, ON. Memorial donations in memory of Gunther may be made to the Heart & Stroke Foundation, or Habitat for Humanity.
Read Less

We encourage you to share your most beloved memories of Gunther here, so that the family and other loved ones can always see it. You can upload cherished photographs, or share your favorite stories, and can even comment on those shared by others.

Posted Oct 14, 2019 at 09:46pm
I was deeply saddened to hear of the passing of Gunther. He was an important part of our company group lunches and will be missed by everyone. We met a few times for morning coffee at Tim Horton's which I will also miss. My condolences to his wife Mary-Louise and family.

Posted Oct 12, 2019 at 03:55pm
Louise, a voice from the past, Ron Hutton. So sorry to hear about Gunther’s passing. I really enjoyed Gunther’s company and working with him over the years. All the best, take care. A really great guy. If I remember correctly one of your sons went to Ottawa university. All the best.

Posted Oct 11, 2019 at 04:46pm
I only recently met Gunther on Friday, September 13 at the Seniors Centre in Burlington. He was new to the Genealogy round Table group. I arrived a little late and claimed the empty seat beside him. Although new to the group, it was clear he had been doing his own research and making significant progress. I thought a neighbour of mine could perhaps help him with some letters, he was trying to translate/understand. Two weeks later on September 27, again I arrived a little late and sat beside Gunther. Just yesterday, I came across the obituary for Gunther in the Star. I knew it was him!!!! The group met again this morning. I arrived on time with page 9 of the Toronto Star in my hand. Instead of looking for an empty seat, I sadly shared the newspaper with the group. Although we had only met a short while ago, it was clear we all shared an interest in genealogy and would have learned a great deal from his research. I hope another family member picks up the threads of his family tree! Condolences to you all! Eleanor Godin
Comment Share
Share via:

Eleanor, I am Gunther's youngest son Trevor. Thank you for your post. I was wondering about this group he had just joined and glad to discover your post. My father had peaked my interest in genealogy about 5 years back and I have been working with him even since. He did well at ensuring I had enough invested into the project to carry on the torch. Everything is so well documented and organised in what he had so far. The letters you mention are from his cousin written from the concentration camps. After he had already translated some postcards from her and discovered parts of their sad story at the camp. It was his current mission to decipher what story her last ever received letter of 3 pages could tell before her and her whole family disappeared. It is now my current mission now to get it completed. 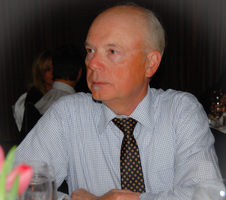