To share your memory on the wall of Christine Montgomery, sign in using one of the following options:


Christine Montgomery passed away peacefully after a brief illness at her home in Burlington, Ontario on July 27, 2020. Predeceased by her husband of 47 years, William Hall Montgomery, in 2003, and by her parents, Otto Ploemacher and Johanna Ploemacher (nee Brinkamp), Christine is survived by her twin brother Karl Ploemacher, her three children, Karen (Stephen), Jeffrey (Suzanne) and Amy, son-in-law Paul Martin, four grandchildren, Peter (Sarah), Benjamin, Jocelyne, and Samantha, and one great-grandchild, Wesley.

Christine was born and raised in Rotterdam, Holland and as a young girl lived through the privations and horrors of World War II, including the German occupation of Holland and the devastating Allied bombing of Rotterdam on March 31,1943. These experiences imbued her with a resilience, determination and strength of will that would characterize her for the rest of her life.

In her late teens she emigrated with her family to Canada, settling in Toronto, Ontario where she met and married Bill Montgomery, raised their three children, and worked first as a medical secretary and then as a legal secretary. Upon retirement, Christine and Bill relocated north to Orillia, Ontario where she enjoyed tending her garden, participating in the community of St. James Anglican Church, looking after her beloved cats, and spending time with family and friends.

In her latter years, as Christine’s cognitive functions declined and living independently became more difficult, she moved to Creekway Village in Burlington, Ontario where she received wonderful, compassionate care and was, in turn, appreciated by staff and fellow residents for her consideration, kindness and playful spirit.

Receive notifications about information and event scheduling for Christine

We encourage you to share your most beloved memories of Christine here, so that the family and other loved ones can always see it. You can upload cherished photographs, or share your favorite stories, and can even comment on those shared by others. 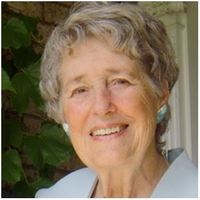