To share your memory on the wall of Bridget Kraft, sign in using one of the following options:

Although school brought challenges for Bridget, she nevertheless distinguished herself as a high school actor, and was class valedictorian in the same year that she was surprised to learn she had successfully graduated.

Bridget cherished her role as a career mother and took the job seriously. A loyal and informed follower of Dr. Spock she was deliberate and engaged in her approach to raising children. Always mindful of the pain and trauma of her own childhood, she was committed to treating her children with fairness and justice, and expected the world to treat them the same way.

Whether it was participating in the Home and School Association, gardening, golfing and playing bridge with her husband Tom Kraft, her advocacy for friends Ted and Anne Rogers and others living with disabilities, her role as a facilitator at the Burlington Seniors Centre, or hosting parties for friends and family, Bridget always showed up: organizing, communicating and connecting with the people around her. A lifelong volunteer working with individuals and community organizations, in her later years she was active at the cancer ward at Joseph Brant Hospital, volunteering to provide compassionate palliative care. Always an extrovert she built a network of friends and collaborators at every stage, and in every corner, of her life.

Bridget was born in North Bay Ontario in 1925, the youngest of four children, seven years after her parents had emigrated from Ireland. Compounded by her mother’s severe stroke Bridget’s early childhood and adolescence was marked by her family’s struggle for stability and economic security. Her family moved frequently and Bridget lived in various locations in Montreal and Quebec City. In addition to her father, Bridget relied heavily for her care on her older siblings Mac and Paddy, and especially her beloved sister Norah, who was six years her senior.

Bridget met her husband Tom Kraft while playing tennis, and was captivated by his intelligence, sense of humour and self-confidence. They were married in Gananoque in 1949 and went fishing to celebrate. The couple moved to Hamilton where Bridget taught dancing at Arthur Murray Studios and from her own home, until she became pregnant. Moving to Burlington in 1953 she and Tom raised four children and built a large network of friends. Whether she was suggesting an extra 50-mile drive to find a wilderness campground or organizing the hunt for a treasure box in the woods, Bridget was always seeking a way to add zest and sparkle to the lives of her children and later her grandchildren.

Following Tom’s death Bridget remained active in the community of friends she had built through the Burlington Seniors Centre and the Alzheimer’s Society during the final years of Tom’s life. This included taking on an important role for more than a decade as a moderator and animator of a popular current events program at the Seniors Centre. With her new partner Cliff Goodwin, Bridget continued to be active, in many ways helping to set an ambitious standard for activity and social engagement for her generation of super-seniors. With the help and skill of her daughter Norah she hosted frequent parties. She exercised under the guidance of a personal trainer and golfed regularly and enthusiastically until she was 92. She was an excellent bridge player, playing regularly - and teaching friends! - until her sight and health failed her in the final months of her life.

After three years of declining health, and finding herself ill and bedridden for the past several months, Bridget opted for Medical Assistance in Dying on Sunday Oct 11. The decision was very much in keeping with the life she lived, reflecting her courage and determination to take control of her life whenever she had the opportunity to do so.

Bridget is survived and mourned by her four children and their spouses - David Kraft and Debbie Field; Norah Kraft and Jeff Doyle; Sarah and Peter Cunningham; Matt and Dianne Kraft - and her eight grandchildren: Joseph Kraft (Terra Duchene), Luke Cunningham (Ali Perry), Molly Kraft (Lee Berkowitz), Kelly Cunningham (Jordan Clarke), Jillian Doyle (Jason Bonser), Erin Cunningham, Sean Doyle and Henry Kraft. As sole survivor among her siblings Bridget was also close to many of her nieces and nephews. As well, she will be missed and mourned by many friends in Burlington and beyond.

There will be a Drive-Through Visitation at SMITH’S FUNERAL HOME, 485 Brant Street, Burlington, on Wednesday October 14, 2020 from 10-12pm. The family will be greeting guests outside. A Private Interment will be held at Gate of Heaven Cemetery.

In accordance with provincial regulations, there is a limit to the number of visitors who may attend at one time. Kindly RSVP in advance for the Visitation by visiting www.smithsfh.com or by calling the Funeral Home (905-632-3333) between 9a.m. - 5 p.m. All visitors are asked to wear face masks and remain in their cars.

Please do not feel the need to send flowers or make a charitable donation. Your sympathy and condolences are more than enough.
Read Less

Receive notifications about information and event scheduling for Bridget

We encourage you to share your most beloved memories of Bridget here, so that the family and other loved ones can always see it. You can upload cherished photographs, or share your favorite stories, and can even comment on those shared by others.

3 trees were planted in the memory of Bridget Kraft

Posted Oct 18, 2020 at 03:23pm
Biddy. It’s hard to lose a good friend, but the memories are forever. Laughs on the golf course, tutoring at the bridge table, great parties, and, your unconditional love of family. My condolences to them all.
Sleep well Biddy,
Helen Marshall
Comment Share
Share via:
S

Posted Oct 14, 2020 at 03:26pm
Molly,
my condolences to you and your family on the loss of your beloved grandmother. The obituary describes her as someone who
" never hesitated to learn what she needed to know to speak up, championing fairness and justice" --this characteristic lives on in you and I suspect other members of your family who were influenced by her. 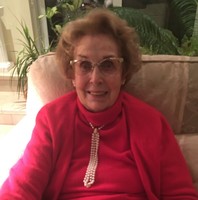