Paul Phoenix Obituary - Burlington, Ontario | Smith's Funeral Home
Immediate Need  Burlington:905-632-3333    Grimsby: 905-945-2755    Stoney Creek: 905-664-4222
Contact Us
COVID-19 UPDATES
COVID-19 GRIEF & GUIDANCE
Because we are committed to everyone's health and wellness, at this time we kindly ask that you call ahead to make an appointment for any reason (including arrangements, dropping off or picking up paperwork or donation cards, or any other general inquiries).

In Memory of
Paul Joseph
Phoenix
1928 - 2019
Click above to light a memorial candle.
Memorial Candle Tribute From
Smith's Funeral Home
"We are honored to provide this Book of Memories to the family."
View full message >>>
Plant a Tree In Memory of Your Loved One
Click Here
Menu

In the event that there is an error
in the information presented,
please contact the funeral
home by clicking here. 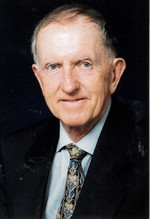 Passed away peacefully at his home in Burlington, Ontario on Sunday, March 10, 2019. Predeceased by his beloved wife of 62 years, Patricia (nee Kearns). Loving father of Marie Kilian (Larry), Margaret Chenoweth, Bill (Liz), Jim (Margaret), Mary Ellen Opie (John) and Jane Phoenix (Walter Konther). Loving grandfather of Christine Gunn (Geoff), Michelle, Andrew, Allison, Theresa, Raymond, Emily, Bradley, Brendan, Owen and Patrick. Cherished great grandfather to Carter and Mason Gunn. Also, predeceased by his infant daughter, Patricia Ann (1960) and his parents Raymond Phoenix and Marie Phoenix (nee Hagerty). Paul will be fondly remembered by his extended family and friends. Paul was born in Hamilton, Ontario in 1928. He was a graduate of St. Ann Catholic Elementary School and Cathedral Boy’s High School in Hamilton. He graduated from St. Michael’s College at the University of Toronto with a BA in 1949 and an MBA from the University of Toronto in 1951. Paul spent 41 years at Dofasco, retiring as Chairman and CEO in 1992. He was a member of the boards of: The Bank of Nova Scotia, Mutual Life of Canada, Boise Cascade, GenCorp, St. Joseph’s Villa and the Catholic Children’s Aid Society. He was the past President of the Canadian Manufacturers Association. Paul was an avid golfer holding memberships at: Burlington G&CC, Hamilton G&CC and Turtle Creek in Tequesta, Florida. A special thank you to his caregivers, especially Samantha Graham.
Visitations at SMITH’s FUNERAL HOME, 485 Brant Street, (one block north of City Hall), BURLINGTON, 905-632-3333 on Friday, March 15, 2019 from 3-5 p.m. and 7-9 p.m. Vigil Prayers at 4:30 p.m. Funeral Mass will be held at Holy Rosary Roman Catholic Church, 287 Plains Road East, Burlington on Saturday, March 16, 2019 at 10 a.m. Interment at Holy Sepulchre Catholic Cemetery, Burlington. Celebration of Life at Burlington Golf and Country Club (422 North Shore Blvd E, Burlington) following the interment. Flowers gratefully declined. If desired, donations to Cystic Fibrosis Canada would be sincerely appreciated by the family.