To share your memory on the wall of William "Bill" Stewart, sign in using one of the following options:

Passed away peacefully at Joseph Brant Hospital in Burlington on Saturday, November 16, 2019 at the age of 77. Loving and devoted husband of Shirley (nee Everett) for 54 years. Cherished father of... Read More
STEWART, William Alexander “Bill” -

Passed away peacefully at Joseph Brant Hospital in Burlington on Saturday, November 16, 2019 at the age of 77. Loving and devoted husband of Shirley (nee Everett) for 54 years. Cherished father of Jeff Stewart (Diana) and Jennifer Taylor (Brent). Proud grandfather of Brady, Bronwyn, Alexandra and Ethan. Dear brother of Andrew Stewart (Josée), Barbara Zade, Mary Shipley, and Nancy Howie (Bill Hepburn). Bill will also be sadly missed by his extended family, many nieces and nephews and friends. Special thank you to the doctors, nurses and staff of Joseph Brant Hospital for their care and kindness.

Bill was born in Windsor and grew up in Riverside, ON. Growing up, he was an accomplished hockey player playing junior hockey and excelling at numerous athletics. His working career spanned Chrysler, the Windsor Star and Goodyear (Medicine Hat and Toronto) before buying and operating Spectrum Label in Burlington until his retirement. He had an undeniable passion for golf which started from his early competitive tournament play until recently. He continued to play for the love of the game with his friends and family. His second, and some may argue his first home, was the cottage in Turkey Point. Here he enjoyed the cottage life with family and many friends. During his retirement, he enjoyed boating, entertaining and of course, more golf. When home in Burlington he was an avid curler at Burlington Golf & Country Club and travelling for various bonspiels. There is no denying Bill lived life on his own terms in his pursuit to enjoy life to the fullest.

Visitation will be held at SMITH’S FUNERAL HOME, 1167 Guelph Line (one stoplight north of QEW), BURLINGTON, 905-632-3333, on Friday, November 22, 2019 from 12 noon until the Funeral Service which will commence at 1:00pm. Reception to immediately follow at the funeral home. Private Cremation and Interment to take place at a later date. In lieu of flowers, donations in memory of Bill to The Carpenter Hospice or the Heart & Stroke Foundation would be sincerely appreciated.

Receive notifications about information and event scheduling for William "Bill"

We encourage you to share your most beloved memories of William "Bill" here, so that the family and other loved ones can always see it. You can upload cherished photographs, or share your favorite stories, and can even comment on those shared by others.

Posted Nov 20, 2019 at 07:33pm
Our best memories of Bill are fun times at Turkey Point. He always had a cottage project on the go, shared stories of his golf games and took charge of the bbq. We send love and sincere condolences to Shirley and all the family. See you on Friday. Love Wayne & Gilda Everett 🙏❤️
Comment Share
Share via: 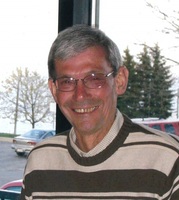