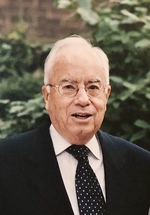 Peacefully, at Joseph Brant Hospital in Burlington on March 19, 2020, in his 90th year. Predeceased by his beloved wife of 57 years, Heather (nee Goldstein). Cherished father of Marla Copeland Larock and Camilla Copeland and loving grandfather of Ciara, Annika, Charles and Benjamin. Admired brother of Catherine Attridge and uncle of Sarah Attridge.

Bill was born in Wingham, Ontario in 1931 and raised in Windsor. He began his career as a chartered accountant at Brokenshire Scarff in Windsor and moved to Peat Marwick in Hamilton in 1960, where he would spend the next 30 years. He was named Partner and remained with the firm, as it merged to become KPMG, until his retirement in 1990. Bill highly valued his relationships at the firm.
Bill served on the boards of The Hamilton Club, and the Canadian Cancer Society (Hamilton). He also managed the finances of the Hamilton Community Foundation and served as treasurer at Port Nelson United Church in Burlington.

Married in 1959, Bill and Heather moved from Windsor to Hamilton before making Burlington their home in 1968. Bill was an avid golfer and a member of The Hamilton Golf and Country Club for over 50 years. An early riser, Bill liked to book the first tee time of the day. He enjoyed winter trips to Florida to golf with his regular partners and travelling to Europe with Heather.

Bill required bypass surgery in 2004 and was grateful for the excellent care he received from Dr. Kevin Teoh and Dr. Brian Sullivan, and ongoing care from Dr. Paul Hart. Soon after surgery, Bill began visiting the gym most mornings at 7 am, a routine he would continue for the next decade.

Friends and family will remember Bill as a gentleman, honourable, dependable and thoughtful. He was a man of integrity with his greatest pride and joy his family. He spent his last three years at LaSalle Park Retirement Community in Burlington, where his sister, Catherine, also resided. Bill enjoyed talking politics, dinners with his tablemates and family, and keeping up with his grandchildren’s happenings. A special thanks to the many who showed Bill kindness at LaSalle, especially the irreplaceable Magnolia Arbelaez.

A private family interment will take place later this month at Mount Pleasant Cemetery in Toronto. In keeping with current circumstances, a celebration of life will be held at a late date. For those who wish, donations to the Heart & Stroke Foundation would be appreciated.