To share your memory on the wall of Roger Graham Shore, sign in using one of the following options:

Graham emigrated to Canada in 1970 from his native England. He was a skilled tool and dye maker, carrying on his father’s trade in Toronto and later at General Motors Components Plant in St. Catharines, Ontario.

Graham enjoyed summers with his young family camping on the shores of Lake Erie at Sherkston Shores. He picked up tennis again and became an avid player, both in St. Catharines and later at Appleby Tennis Club in Burlington. Despite a chronic pain condition, Graham enjoyed life and spread his infectious sense of fun to those who came into his life, all the while taking very good care of his girls, of whom he was extremely proud. If only he could have had more time with them and their little boys. He will be sorely missed. The family's heartfelt thanks to the wonderful medical and nursing staff on the 6th floor of the Juravinski Tower at St. Joseph's Hospital.

Graham requested cremation. A family celebration of his life will take place at a later date.
Read Less

Receive notifications about information and event scheduling for Roger Graham

We encourage you to share your most beloved memories of Roger Graham here, so that the family and other loved ones can always see it. You can upload cherished photographs, or share your favorite stories, and can even comment on those shared by others. 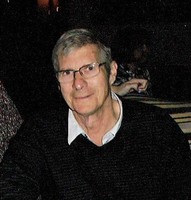