To share your memory on the wall of Robert Wales, sign in using one of the following options:

It is with sadness that our family announces the passing of Robert (Bob) in Burlington, ON after a brief illness.

It is with sadness that our family announces the passing of Robert (Bob) in Burlington, ON after a brief illness.

Bob (predeceased by sister Moira (Nick) and parents David and Christina) will be missed by his brother Dave (Faye), nephews Colin and Steven, nieces Alison (Pat) and Valerie (Lou) and their children Katie, Marc and Lily.

Bob emigrated from Scotland in 1966 and spent most of his working life as a Sheet Metal worker in Hamilton.

Bob was heavily involved with Hamilton Sparta soccer club in the 70’s and one of his great pleasures was being a member at King’s Forest Golf course for over 25 years.

Those who knew Bob will remember his easygoing personality, his sense of humour and the fun they had in his company.

We would like to thank the staff at The Brant Centre for the care and compassion shown to Bob during his time there.

In light of current regulations, the family will be holding a private service.
Read Less

Receive notifications about information and event scheduling for Robert 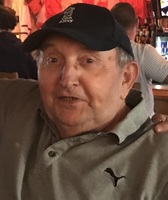