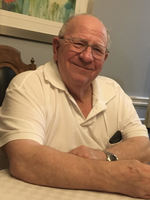 Passed away peacefully at Oakville Trafalgar Memorial Hospital on February 6, 2020, at the age of 78, with his grandson Patrick by his side. Richard will be deeply missed by his wife of over 52 years Betty, children Deborah Redmond (John) and Richard (Christine), grandchildren Meghan Dunn, Patrick Dunn, Michaela Furgat, Richard Gabriel Furgat, and Liam Dunn, and little sister Annette Haddad. Richard was born and raised in Toronto to parents Adam and Mary (Sierant). Richard and Betty met through Annette and married about 4 years after their first of many movie dates, to see Cleopatra. Richard and Betty moved to Mississauga to start their family, and later to Oakville where they lived for over 40 years. Before he retired 16 years ago, Richard was a long time employee of BASF and had fond memories of his time there. Richard was a man who held great importance to family, including his nieces and nephew. He dearly loved his wife, children, grandchildren, and sister, and always had their best interests at heart. He enjoyed going to the cottage in Innisfil, woodworking and doing various home renovations, but most of all he loved talking to people about just about anything. Richard was a conversationalist who kept on top of world news and politics, and researched almost everything before he bought it, so he could make an educated purchase and negotiate a good deal. He was always ready to offer his opinion and advice (solicited and unsolicited) on a variety of subjects. As much as we sometimes didn’t want to admit it, he was always right (well almost always). Richard fought a long and strong battle against cancer and well outlived his prognosis. While battling and overcoming multiple complications in the hospital over the last two months, he managed to keep his humour, stubbornness, and maintained his focus of getting out of the hospital and going home - a goal that he sadly could not attain. In memory of Richard, donations to the Canadian Cancer Society would be appreciated.

Do you not know that a man is not dead while his name is still spoken? Richard, we will say your name often