To share your memory on the wall of Peter Harris, sign in using one of the following options:

It is with great pride that we announce the arrival of Pete... Read More
“You are a good and faithful servant. I left you in charge of only a little, but now I will put you in charge of much more. Come and share in my happiness!” Matthew 25:23

It is with great pride that we announce the arrival of Peter Roy Harris into Heavens glory. No doubt he already has everyone gathered around and is tuning the harps and writing music for the chorus as he shares his many life experiences.

Born in the UK on September 6, 1935 his lengthy military band career took him around the world with the Royal Engineers Band. His great love for photography enabled him to document much of this time as he shot and developed his own black and white prints. A major change in life came when the Harris family moved to Canada in 1975 ending his military career but starting him out on a new adventure. He reconnected with The Salvation Army in Canada and was an active member of the Senior Band for as long as he was able and Praise Band until the end. He helped give our little family a strong foothold, starting from scratch in a new country. He retired from Purolator Courier after working there for 25 years and was then able to take the time to share his love for music, golf, N scale trains, puzzles, guitar, painting, model boats, fishing and digging and building epic sand castles with his grandchildren, creating lasting memories with each of them.

After a sudden decline in health, he lost his battle with cancer on March 26, 2020. Those that will miss him include his wife Christina, daughter Wendy Taylor (Robert), son Matthew and grandchildren, Meighan, Tyler, Nathanial, Brooklyn, Skye and Luke.
His sisters Gladys and Bobbie and brother Tom in the UK and Australia.
The many friends, co-workers and people whose lives he touched along the way.

No, the journey doesn’t end here. Death is just another path, one that we all must take. The grey rain-curtain of this world rolls back, and all turns to silver glass, and then you see it. JRR Tolkien

If you would like to make a donation in memory of our Peter, please consider the Joseph Brant Hospital to support the amazing staff as they respond to the ongoing COVID-19 outbreak.
https://jbhf.akaraison.com/ui/covid19
Read Less

Receive notifications about information and event scheduling for Peter

We encourage you to share your most beloved memories of Peter here, so that the family and other loved ones can always see it. You can upload cherished photographs, or share your favorite stories, and can even comment on those shared by others.

Posted Apr 02, 2020 at 07:41am
Peter, I am in a state of shock over this sad news. I only spoke to you 3 weeks ago and you were your normal jovial, bubbly self. I had the pleasure of knowing you and Christina and Thank You both for giving so much happiness to mum. Mum loved speaking to you, coming to see you in Canada and having you stay here in England. I know she will look after you and no doubt there will be a lot of fun and laughter. This is so difficult to put into words especially after losing mum just 3 months ago. You are an inspiration to many people, loved by so many people and will be missed by so many people. Love and prayers go to Christina and all the family. Peter you will leave so many happy memories for people all over the world and for this we all thank you. Rest in peace
Comment Share
Share via:
M

Posted Apr 01, 2020 at 12:03pm
Peter, you are my mentor, my teacher,my really good friend. You are such a talented man and in the few short years that I knew you, I am sure that I only scratched the surface. Although I did not know you a long time, I think I came to know you quite well.
Music, painting, trains and golf. You taught me so much. I enjoyed listening to your stories about your childhood during the war; your many adventures while in Boy Service and the army; your love of motorcycles; your time with the different bands; your never regretting coming to Canada; your time with Purolator; and your family. All while we sat in Tim Hortins every Wednesday morning sipping our coffee. You often talked about your children and grandchildren and you always followed with your impish laugh.
I will miss our Wednesday mornings on the golf course followed by our hours spent at Tim Hortins. I was a newby to the game but you took me under your wing and you were always very patient with me. I only wish I had listened more carefully to your instruction on the golf course. Peter, I hope you have a "#4 special" club with you for now you can play unlimited golf and maybe show those pros a thing or two.
And I will treasure the paintings you have done for me and fondly remember you when I look at them.
Peter, as you know, I don't believe in God or heaven and I won't say good-bye. But I will say, as I always did every Wednesday, "See you later bud" just in case we do meet again.
Mike
Comment Share
Share via: 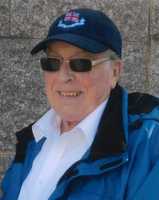