To share your memory on the wall of Patricia Young , sign in using one of the following options:

Provide comfort for the family of Patricia Young with a meaningful gesture of sympathy.

We encourage you to share your most beloved memories of Patricia here, so that the family and other loved ones can always see it. You can upload cherished photographs, or share your favorite stories, and can even comment on those shared by others.

Posted Feb 07, 2020 at 12:13pm
To Fred and all the family, so very sorry for your loss. I knew Pat through U.C.W. and served with Pat on bazaars, rummage sales, and fundraising for Appleby. Pat also worked tirelessly on many facets for the church. Her energy and focus will always be remembered.
With sincere condolences may she Rest in Peace
June and Bernie McGarry
Comment Share
Share via: 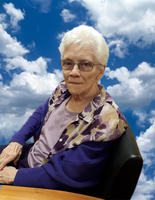