To share your memory on the wall of Mary Nikitin, sign in using one of the following options:

Provide comfort for the family of Mary Nikitin with a meaningful gesture of sympathy.

We encourage you to share your most beloved memories of Mary here, so that the family and other loved ones can always see it. You can upload cherished photographs, or share your favorite stories, and can even comment on those shared by others.

Posted Dec 19, 2019 at 10:48am
Dear Nikitin Family, Please accept our heartfelt condolences for the loss of your beloved mother Maria. I remember your Mom from Wasaga Beach when the Kumy would gather at the cottages. She had an infectious laugh and love for life and people. She raised a beautiful family in all of you. You are in our steadfast prayers that God comforts you in your time of loss. May her memory be eternal! With love Mary (Melnyk) and Theo Van Kooten
Comment Share
Share via:
NG

Posted Dec 18, 2019 at 10:18am
Maria was my adopted Aunt. She was a wonderful person who lit a room on entering. Many wonderful memories through the years including George accompanying Maria and my Father as they sang. Maria was a wonderful cook and enjoyed entertaining family and friends. My brother Alex called Maria, his Godmother, Kuma in tribute to a special bond. Through the years the life long friendship of Toscia, Maria and my mother Katia. They knew how to laugh together. And, Babyushka Katia who would smile as she was with her girls. With sadness she is gone, but with a bouquet of memories in my heart. I wish Paul and I could be there to say to Sasha, Pavlik, Dina, Tanya and their families sympathy and love. Our parents created a great family of friends and Maria was the last remaining of those architects. In loving memory. Nadia Stachowsky Gray
Comment Share
Share via: 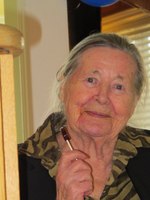