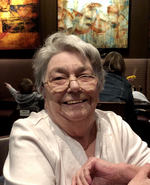 MacIsaac, Mary "Aileen" (nee Landry)
It is with heavy hearts we announce the passing of Aileen at Joseph Brandt Memorial Hospital at the age of 79. She was predeceased by her husband David and son Stephen and will be greatly missed by her daughters Kathy (Vito) Janice (Joe) and Sheila (Ross).
Her grandchildren Philip, Danny, Kimberly, Sean, Pat, Jennifer, Stephen, Caitie and TJ are her legacy and they will always love their Gramma. She also leaves behind her brother Barry (Carol) of Nova Scotia as well as many extended family members and friends.
Aileen was a devoted wife, mother and grandmother. In addition to raising her own 4 children she was very active and present in the lives of her grandchildren. They all share fond memories at gramma's house and will certainly recall the colourful mittens she knitted for them. Aileen had a sharp sense of humour and enjoyed a wide array of music that included Johnny Reid, Andre Rieu, Roy Orbison and of course her beloved Elvis. She loved to have a good time and was able to enjoy a down home "lobster fest " with her family a week before she passed.
She was a strong lady, but also had a soft side. To our surprise, she embraced technology in her later years and mastered her iPad. She took advantage of social media to stay close with family and friends both near and far. Netflix did not have a horror movie that could intimidate Aileen.
She loved animals, especially her cats Shadow and Eddie.
Per her wishes, there will be no formal funeral service. Donations to Animal Adoptions of Flamborough in her memory would be greatly appreciated.