To share your memory on the wall of Mary \"Aileen\" MacIsaac, sign in using one of the following options:

Receive notifications about information and event scheduling for Mary "Aileen"

We encourage you to share your most beloved memories of Mary "Aileen" here, so that the family and other loved ones can always see it. You can upload cherished photographs, or share your favorite stories, and can even comment on those shared by others.

Posted Sep 08, 2020 at 10:59pm
Sheila and Ross and Family,
Sincerest condolences on your loss.
Please know you and in our thoughts.

Posted Sep 07, 2020 at 06:11pm
Aileen, you will be sorely missed. You welcomed me into you home and your heart. Your big smile and contagious laugh will always bring happy thoughts to my mind. Say hello to Steve for me and I promise the both of you that I will keep watch over Robin. She loves you both so much and misses you both immensely. May God continue to watch over your entire family and friends and take comfort in knowing you were welcomed with open arms and loving hearts.
Comment Share
Share via: 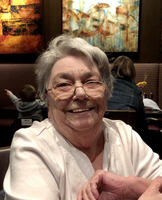