To share your memory on the wall of Lloyd Gesner, sign in using one of the following options:

Passed away at Oakville Trafalgar Memorial Hospital on Friday, July 17, 2020 at the age of 92. Beloved husband of the late Murial Gesner. Loving father of Stephen Gesner (Debbie Cameron) and Susan Gesner (Sean Trueland). Proud grandfather of Rory and Jaime Trueland, and Cameron and Konrad Gesner. Dear brother of Harry Gesner.

Starting his career as a teacher in Halifax, Nova Scotia, Lloyd met the love of his life, Muriel Ferguson, and they went on to live a life of adventure, travel and learning. Lloyd attended theology school to become an Anglican minister, and that calling took him to Minnesota, Ontario, Ohio, Tennessee and finally a return to Ontario. During that time, he was a teacher and headmaster at a number of ecumenical schools, as well as maintaining his role as a priest in both Anglican and Episcopalian churches in Canada and the United States.

His real passion was reading and learning. His home was filled with fiction and non-fiction books on bookshelves that were constantly being emptied and filled up again. He shared his books willingly, as long as he had a chance to discuss them with the borrower after the fact. And often those borrowers were his grandchildren, who were his greatest joy.

As per Lloyd's wishes, cremation has taken place. A Service of Remembrance will be held at a later date. Memorial donations may be made to the Juvenile Diabetes Research Foundation.
Read Less

Receive notifications about information and event scheduling for Lloyd

We encourage you to share your most beloved memories of Lloyd here, so that the family and other loved ones can always see it. You can upload cherished photographs, or share your favorite stories, and can even comment on those shared by others.

Posted Aug 03, 2020 at 07:49pm
Twenty-four years ago today, Uncle Lloyd performed my marriage ceremony. Growing up, I always thoroughly enjoyed spending time with he and Aunt Muriel, and my husband and I were thrilled when he agreed to do the honours at our wedding. He was kind, smart, and a truly special human being. I know how much you will all miss him. Sending love from Nova Scotia.
Tara-Lynn & Ken Byron
(Sandy Squires’ daughter)
Comment Share
Share via:
GC

I am so sorry to hear of the passing of your father. Your father & mother became good friends of my father & mother, Lorne & Eileen DeMone when they lived in Windsor, Nova Scotia. I remember as a child visiting your home many times at Kings College when he was Headmaster. I also remember his library of books thinking Wow what a collection. My father was known as Dutchie & he had the bakery on O'Brien Street & we belonged to the Anglican Church in Windsor. My parents always sent a Christmas card to your parents when they were alive.

Posted Jul 27, 2020 at 07:11am
Lloyd Gesner was my Uncle. He was to say the least an imposing figure. Imposing physically, and imposing intellectually, however this was far from a barrier when people came to know him. With that booming voice and confident posture he was ideally suited for the Ministry, but he was first and foremost a keen intellectual. Always looking to learn more about the world and those around him. He had an interest in virtually everything and everyone. As a young child, I found him fascinating.
On behalf of my Mother Dorothy Lamont and my Aunt Inez Bollong, may I express sincere condolences to Stephen and Susan and and your family members. Your loss is substantial.

Posted Jul 26, 2020 at 09:47pm
Canon Lloyd Gesner took a chance on a young teaching couple in 1968 by hiring both of us to teach at St. Mary’s Hall. We are forever indebted to his confidence in us and are deeply appreciative. We may have drifted apart but we never forgot his kind and generous spirit. Rest In Peace Canon Gesner😢
Comment Share
Share via: 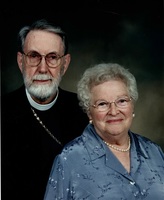