To share your memory on the wall of Lloyd Ferguson, sign in using one of the following options:

It is with deep sadness that we announce the sudden passing of Lloyd Ferguson on Sunday January 19,2020 at the young age of 89. Surrounded by his devoted family, Lloyd died as he lived, with grace and dignity. Lloyd was pr... Read More
LLOYD FERGUSON

It is with deep sadness that we announce the sudden passing of Lloyd Ferguson on Sunday January 19,2020 at the young age of 89. Surrounded by his devoted family, Lloyd died as he lived, with grace and dignity. Lloyd was predeceased by his loving wife Mary Louise Ferguson (nee Mulligan), parents Parmenas and Margaret Ferguson, sister Nancy Bennett, brothers Alfred and Gordon, and grandson Jack Carter. Left with so many cherished memories are children Palmer Ferguson, Stacey Ferguson-Carter (Steven Carter), John Ferguson (Melanie), Kendall Ferguson and Ted Ferguson (Michelle Steele), and grandchildren John Stevenson, Charles Carter, Gretchen Ferguson and Elway Ferguson. Lloyd will be fondly remembered by his extended family and countless friends and colleagues.


Born in Winnipeg, Lloyd’s first passion was the game of hockey. From his early childhood days at the rink, he ascended to play in the Western Canada Senior Hockey League which eventually led him to Ontario and the Ontario Hockey Association Senior A League. True to form, his final days included watching hockey and talking about the sport he loved.


Lloyd’s network of friends and admirers grew exponentially through his second passion, the car business. Selling cars to support himself as he played hockey, he set down roots in Hamilton and began his career at Queenston Motors. It was there, that he met the love of his life, Mary Lou Mulligan. They married in March 1963 and had five beautiful children.


In 1968, Lloyd opened Mohawk Ford Sales Limited where his commitment to honesty and integrity quickly made it a success. One of Ford of Canada’s longest serving Dealer Principals, Lloyd was deeply respected by all who knew him. He worked hard every day and his dedication, gratitude and respect for all of his employees and customers was unwavering.


Lloyd was an extraordinary man who loved life and, more importantly, people. His indomitable spirit, impressive wit, and inherent goodness will forever be remembered. Those fortunate enough to know his joyful smile, contagious laughter, unending kindness and generosity, are left with a profound emptiness. And while Lloyd touched many lives, no one will feel his loss more deeply than his family, who knew him as a loving and devoted father and grandfather.


Lloyd’s family would like to extend sincere gratitude to Kerry Ann Grant and all of the dedicated caregivers for their kindness and compassion during his final years.


As an expression of sympathy and in lieu of flowers, donations in memory of Lloyd to the Alzheimer Society of Hamilton and Halton would be sincerely appreciated by the family.
Read Less

Receive notifications about information and event scheduling for Lloyd

We encourage you to share your most beloved memories of Lloyd here, so that the family and other loved ones can always see it. You can upload cherished photographs, or share your favorite stories, and can even comment on those shared by others.

Posted Feb 02, 2020 at 08:21am
Mr. Ferguson was always so welcoming to the Mohawk Ford Family. He would always greet me with a welcoming smile when I stopped by the dealership to see my dad.
I have lots of great memories of the Mohawk Ford Christmas parties. His generosity was greatly appreciated. He will always be remembered fondly.
My sincerest condolences to all of his family.
Comment Share
Share via:
DW

Posted Jan 29, 2020 at 10:08am
Ted, John & Kendall, very sorry to hear of the loss of your Dad. I only met him a handful of times when Ted & I first started hanging out a long time ago, but getting to know the three of you, it's clear to me his children were people I wanted to know. Can't recall a time, in the presence of any of you without having a laugh or smile. When I heard the news this past weekend, I thought of times with Ted, Beev & Bryce, Sunday morning hockey trying to keep up with John and being U of G alumns with Kendall. Sorry I can't make it this weekend, going somewhere I'm sure your Dad would have appreciated. Hopefully our paths cross again soon.
Darrin Wathier
Comment Share
Share via:
FM

Posted Jan 29, 2020 at 09:42am
Lloyd was my patient for many years. I always enjoyed his visits. He was a wonderful individual
Frank Murphy
Comment Share
Share via:
M

Posted Jan 28, 2020 at 04:45am
Mr Lloyd Ferguson its hard to pick one memory..i cherish them all from first time I met Lloyd Ferguson and the whole family..He means so much to me❤..Thank you for welcoming me....You are an angel now watching over all of us..Forever love you...
Comment Share
Share via:
LR

Posted Jan 25, 2020 at 11:46pm
"A person that departs from this earth never truly leaves, for they are still alive in our hearts and minds, and through us, they live on. Mr Ferguson will never be forgotten.” My sincere condolences to the Ferguson Family. You are in my thoughts and prayers.
Lori Robinson (nee Dickinson)
Comment Share
Share via: 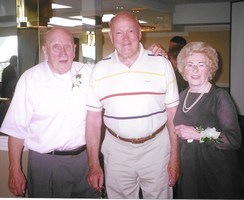 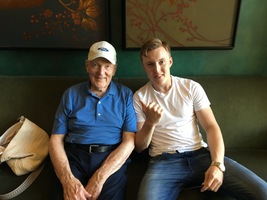 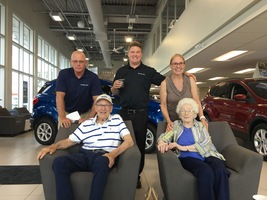