To share your memory on the wall of Lawrence Bonanno, sign in using one of the following options:

In 1931 the curtain rose with the birth of Lawrie within the sound of Bow Bells in London England. On July 16th, 2019 the curtain fell for the final time as Lawrie passed peacef... Read More
LAWRENCE BONANNO

In 1931 the curtain rose with the birth of Lawrie within the sound of Bow Bells in London England. On July 16th, 2019 the curtain fell for the final time as Lawrie passed peacefully at The Carpenter Hospice in Burlington, Ontario after a brief, but hard fought battle with cancer.

At 17, Lawrie began his studies at the Royal Aircraft Establishment in Farnborough England, after 7 years he completed an apprenticeship winning first class in Aeronautical Engineering. Soon after, he met Fay at a dance night at the local hostel where he was boarding. After graduation he emigrated to Hamilton, Ontario and 9 months later Fay followed him to Canada and they were married in July 1955.

He is survived by wife Fay, son Trevor and wife Karen, daughter Lynda and husband Keith, five wonderful grandchildren Clair, Kevin (Karen), Chris (Allison), Michelle and Jessica, and Nora a new great granddaughter who made him smile every time he saw her. He is survived by his sister Maureen and sister-in-law Iris, and predeceased by Victor and Veronica.

Lawrie started his career in Canada at the Research and Development Lab in Hamilton. A number of years later he established his own company; Bonanno Systems, where he specialized in printing press installation and maintenance, instrumentation of specialized components for hydro electric generating stations, and custom prototype machining. A full time endeavor until his 83rd year when he began to slow down due to illness. Early hobbies included sailing his boat Scavenger, in Lake Ontario, target shooting for the Hamilton Shooting Club, watch and jewelry repair, camping and canoeing in Algonquin Park and doing production, sound and lighting for local dance company recitals. His hobbies eventually landed him at Burlington Little Theatre (Theatre Burlington) where he orchestrated sound, lighting, set design, and producing numerous plays. He was instrumental in the building of the Drama Centre in Central Park. He received numerous awards from Theatre Burlington, Theatre Ontario, and the Western Ontario Drama League, The Burlington Performing Arts Centre, and the Outstanding Achievement Award for Volunteerism from the Ontario Ministry of Culture.

Visitation will be held at SMITH’S FUNERAL HOME, 1167 Guelph Line (one stoplight north of QEW), BURLINGTON, 905-632-3333, on Friday July 19th from 3-5 pm and 7-9 pm. A Celebration of Life will take place at St Luke’s Church (1371 Elgin Street, Burlington) on Saturday July 20th at 1:00 pm. Reception to follow in the Parish Hall. Private cremation has taken place. In lieu of flowers, donations to The Carpenter Hospice in Burlington would be appreciated.
Read Less

Receive notifications about information and event scheduling for Lawrence

We encourage you to share your most beloved memories of Lawrence here, so that the family and other loved ones can always see it. You can upload cherished photographs, or share your favorite stories, and can even comment on those shared by others.

Posted Jul 20, 2019 at 09:44am
"Uncle Lawrie. It was always a highlight of my many trips to Canada (both as a young terrible twin and in recent years) to drop by Drury Lane and catch up with you and Fay. From swimming at the Westaway's to swing under the ever present sycamore tree or trying to understand what you we really did with load cells in the shop. Thank you for always being home. It was wonderful that you, Fay, Trevor, Karen and Chris could drop by and see the home Karen and I have in England in 2009 and at long last give me the opportunity to return that warmth and hospitality. Thank you for always being my uncle. Kevin"
Comment Share
Share via:
SN

Posted Jul 19, 2019 at 12:12pm
In the early days of Theatre Aquarius in Hamilton we appreciated Lawries assistance in getting" stuff" that we needed for a production. Just prior to the opening of Theatre Aquarius' new theatre I recall a brave contingent from BLT. that included Lawrie, Trevor, and Ron Hebbard loading in new stage lighting to the FOH positions. Efforts such as these will never be forgotten.
Steve Newman
Comment Share
Share via:
JH

Posted Jul 19, 2019 at 06:28am
My condolences to Fay and the Bonnano family. Unfortunately I am out of the province and won’t be able to attend the celebration of Lawrie’s life but I pray you will have special times together remembering Lawrie as you support each other moving forward as a family. Hugs, Janine Heaven
Comment Share
Share via:
LM

Posted Jul 18, 2019 at 04:10pm
I am so sorry to all of you for your loss. Lawrie contributed so much to little theatre. He was such a good friend to my parents and to me. I am so glad I had the chance to see him in March and give him a big hug. He will be sadly missed by so many. The pic of him holding his first great grandchild will be a nice memory for you all. I am sure Lawrie is somewhere fixing and creating things. I just hope they have Chinese food wherever he is. I hope he is saying hello to mom and dad for me. Love to you all.
Comment Share
Share via:
BM

Posted Jul 18, 2019 at 12:09pm
Sending my condolences to Fay and family. I am sure that Lawrie is holding a WODL executive meeting with Anne, Val and Fred.
Comment Share
Share via: 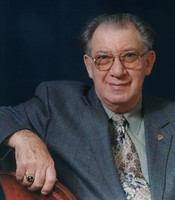 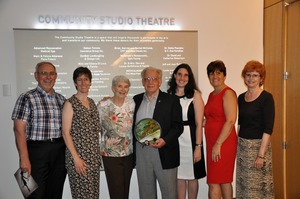 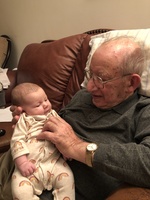