To share your memory on the wall of Jude Malone, sign in using one of the following options:

Provide comfort for the family of Jude Malone with a meaningful gesture of sympathy.

Passed away peacefully on Monday, January 13, 2020 at Joseph Brant Hospital in Burlington in his 80th year. Born on June 20, 1940 in County Offaly, Ireland. Survived by his devoted wife Barbara Malone (nee McDonald) of 51 years along with his son Kevin and his family. Predeceased by his daughter Maureen (April 27, 2015). Cherished grandfather of Brinnin, Gaven and Kendra. He leaves behind 3 sisters and 1 brother as well as many nieces and nephews in Ireland.

Jude was a proud member of several organizations, including The Irish Canadian Club of Hamilton and The Hamilton G.A.A. Club. He was also a 4th degree Knight of Columbus (chapter 5073). Jude spent a great deal of time volunteering for The Good Shepherd, Dr. Simoni and St. Vincent de Paul at St. Patrick’s Church.

Visitation at SMITH’S FUNERAL HOME, 1167 Guelph Line (one stoplight north of QEW), BURLINGTON (905-632-3333), on Monday, January 20, 2020 from 6-9 p.m. Funeral Mass will be held at St. Patrick’s Roman Catholic Church, 196 Kenwood Ave., Burlington on Tuesday, January 21 at 10:30 a.m. followed by a Reception. Interment at Gate of Heaven Cemetery. As an expression of sympathy, donations made to The Good Shepherd or Dr. Simoni’s Canadian Food for Children Warehouse would be greatly appreciated.
Read Less

Donations are being accepted for:
CANADIAN FOOD FOR CHILDREN THE GOOD SHEPHERD CENTRE HAMILTON

We encourage you to share your most beloved memories of Jude here, so that the family and other loved ones can always see it. You can upload cherished photographs, or share your favorite stories, and can even comment on those shared by others.

Posted Jan 22, 2020 at 09:06pm
I spent many hours over time with Jude at the 40 Days for Life Vigils at both the old and new OTMH as well as in the 4th Degree K of C Colour Corps when Bishop Paul F. Reding Assembly 1981, Pope John Paul II and various other Assemblies in Halton used to combine forces for Honour Guard Events in Regalia before the Colour Corps started to flounder after the retirement of the Regalia effective July 1, 2019.
Comment Share
Share via:

Posted Jan 20, 2020 at 06:37pm
Jude lived and breathed his Catholic faith. He loves our Lord Jesus Christ and he put his faith into action. Jude was a major contributor to Campaign Life Coalition by way of selling our Christmas cakes, attending many events and his generous contributions. We were so grateful for his ardent zeal for protecting the unborn. Will miss this holy and gentle man! God rest his soul.
Comment Share
Share via:
M

Posted Jan 19, 2020 at 07:48pm
Jude was at the adoration chapel every morning by 5 am...he never ever failed to show up and was with the Lord for 3 hours before Holy mass began at St.Raphael’s church at New Street. So blessed to spend so many hours with Jesus before meeting Him in eternity....pray for us Jude - Marion and Christopher
Comment Share
Share via:
NC

Posted Jan 18, 2020 at 12:49pm
So sorry to hear this very sad news,Condolences to you Barbara and son Kevin and grandchildren and family May Jude rest in peace
He was always such a gentleman,We were all very young when we first met new to Canada there was Jude Johnny and Christy all making our way in a new country at the same time ,Great memories Rip our friend ,Tom & Nellie Curran Carlow IRELAND

Posted Jan 17, 2020 at 10:17am
I only met Jude once, three years ago; but, he left such an impression on me. In between prayers in front of the Oakville hospital, during the 40 Days for Life spring campaign, we chatted. He showed me the placard he had made with pictures of smiling babies, encouraging slogans, and an image of Our Lady of Guadalupe. On my way home, I felt that I had met such a good man. He was so warm and welcoming and joyful. I was blessed to have met him. Now I pray that that same Lady welcomes him with joy and passes him on to her Son.
Comment Share
Share via: 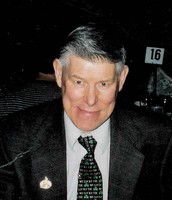