To share your memory on the wall of Joseph Kulis, sign in using one of the following options:

Provide comfort for the family of Joseph Kulis with a meaningful gesture of sympathy.

Visitation at SMITH'S FUNERAL HOME, 1167 Guelph Line (one stop light north of QEW), BURLINGTON (905-632-3333), on Thursday, August 22, 2019 from 6:00-9:00pm. A Funeral Service will be held in the Chapel on Friday, August 23, 2019 at 10:30am. Entombment at Holy Sepulchre Catholic Cemetery, 600 Spring Gardens Road. Reception to follow at Mandarin Burlington. For those who wish, donations in memory of Joseph to Joseph Brant Hospital Foundation would be sincerely appreciated by the family.
Read Less

Donations are being accepted for: Joseph Brant Hospital Foundation.

We encourage you to share your most beloved memories of Joseph here, so that the family and other loved ones can always see it. You can upload cherished photographs, or share your favorite stories, and can even comment on those shared by others. 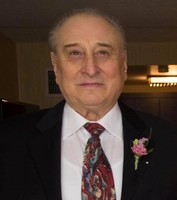