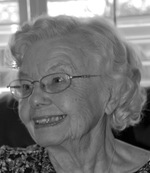 Joan was predeceased by Doug, her husband of sixty years. After Doug’s death, she was fortunate to meet Ray Sams who has been her constant and devoted companion.

Joan was the youngest of a big family; her parents, apparently, ran out of ideas for names so she had just one. As a war bride and released from her service in the RAF, she left her family behind in England and courageously came to Canada after V.E. Day. Joan grew up in Brighton, Sussex, but arriving in Gesto, Essex, Ontario , she lived on a farm with a mother-in-law whom she had never met. Fortunately, Doug was discharged from the RCAF soon after and they were reunited.

Home was Essex, Oxtongue Lake,(where she was postmaster for a year) Hamilton, Waterloo and, finally, Burlington as the family followed Doug’s business interests.

Many happy summers were spent in a trailer at Ruth Lake, near Powassan.

Thanks to the staff and volunteers at Tansley Woods Long Term Care Home for the patience and daily effort demonstrated.

A private observance will be held at a later date.