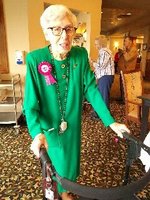 Passed away peacefully just starting her 100th year, with her loved ones by her side. She will be profoundly missed by her long-ago acquired family, Corinne, Marie, Pamela (Rob) and Angela (Paul). She will also be dearly missed by her very close friends, Martha (Fred), daughters Jessica and Helen, as well as the many other members of her “tribe”. One of her many gifts was her ability to draw people into a circle of friendship and caring, linking individuals so that no one was alone anymore and everyone could claim to be one of “Joan’s family.”
Born in England, Joan was a Veteran of World War II, having served with the Auxiliary Territorial Services, which was then merged into the Woman's Royal Army Core, retiring with the rank of Captain. While serving in the war, she met her best friend Elizabeth Mary Cornwell, which lead to the development of her close family. She emigrated to Canada in 1954 with three friends for life, Christine Hamilton, Katherine (Kitty) Arnott and Mary Gunn (all pre-deceased). She was employed with the Children’s Aid Society for 29 years, retiring as Human Resources Director. It was at the C.A.S. she met her friend and housemate in Burlington of 47 years, Madge Eagleton (d. 11/06). She was also a member of the Central Ontario Art Association, Board of Halton Seniors Helpline and a long-time member of the Royal Botanical Gardens Auxiliary, the Burlington Garden Club and an officer in the Hamilton Service Battalion. She earned her Master’s Degree in Social Work in 1972, and became a member of the Professional Advisory Committee of the School of Social Work at McMaster University. Following her B. of Arts, she earned her Master of Social Work at the University of Toronto. It was after her retirement that she decided to learn to paint and began a new career as a water colour artist, gifting many in the community with her works and showings.
A Service of Remembrance will be held at East Plains United Church, 375 Plains Rd E, Burlington, on June 13th, 2019 at 1:00 pm, with a reception at the church to follow. A private interment will have already taken place. For those who wish, donations in memory of Joan to the Burlington Humane Society or the Nature Conservancy of Canada would be sincerely appreciated. The family wishes to extend fond gratitude to the staff and family at Martha’s Landing for the laughs and care through the past decade.