To share your memory on the wall of Iris Garber, sign in using one of the following options:

Receive notifications about information and event scheduling for Iris

We encourage you to share your most beloved memories of Iris here, so that the family and other loved ones can always see it. You can upload cherished photographs, or share your favorite stories, and can even comment on those shared by others.

I met Iris through the Grimsby Art Gallery Volunteer Committee and always admired her dedication to the Gallery, her sense of humour, and her warmth. She and I worked together for a number of years on the Silent Auctions for the annual Art Gallery Fundraiser and Iris always made it fun. She gave generously of her time and advice and I appreciated all of her help when I chaired the Executive Committee. I will miss her greatly as I know will many. My heartfelt condolences to Iris' family; she always spoke so proudly of them.
With sadness,
Marg Bowman
Comment Share
Share via:
LK

Iris and I have been friends for almost 30 years. We both lived in Montreal and went to McGill before I met her in Grimsby. Harry was in my year, but I didn't know him at the time. But I still use his recipe for Pesto which my grandson loves!
Wanting to do volunteer work at the Grimsby Art Gallery, I agreed to work with the Jeunesses Musicales committee which Iris headed. She was a joy to work with and we had fun travelling to Montreal and other venues for meetings and concerts. There were many other occasions when we did things together either alone or with other friends who enjoyed her company.
She made a great contribution to the Art Gallery in so many ways. Sometimes it was just comforting and encouraging us when personal things were going amiss.
I tried to reach her over the holidays , but she didn't answer my calls. I guessed that she was away for a while. I didn't know she was ill or I would have come to tell her how much I valued her friendship and to say good bye.
Comment Share
Share via:
ST

Posted Jan 10, 2020 at 10:30am
I worked with Iris at the Gallery Gift Shop ever since I moved to Grimsby many years ago. It has been a joy and a learning experience.
After she retired she was still our source of information and wisdom. It will be very hard not to be able to pick up the phone and say " Iris what do you think? Iris what would you do?". Occasionally, not often enough I now realize, we had long lunches sharing the latest news in our lives.
Harry's death was a blow to her but I know how attentive her children were and she took great comfort in that.
I'll always be very proud of having been her friend.
Silva Talmassons
Volunteer
Grimsby Public Art Gallery

Posted Jan 08, 2020 at 02:52pm
I am so very upset to hear that Iris has passed away. Tuesdays were always my favourite day of the week because I knew that I would see Iris in the Gallery Shop. She always brightened my day and made my work week better. No words can describe how much she was loved and will be missed. My sincerest condolences to her family - she spoke of you often throughout her years of volunteering at the Gallery and running the Shop. It a bit of a comfort to know that she is reunited with Harry, though I am still incredibly sad and I will miss her greatly. Thank you, Iris, for your many years of friendship, it meant so much to me.
~Allison Poole
Grimsby Public Art Gallery 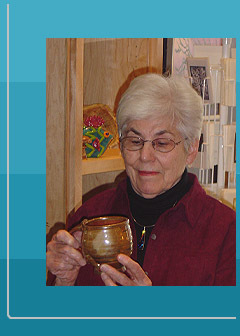