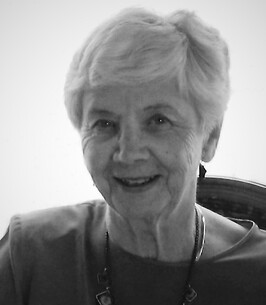 Grace and her husband Allan were as close as a couple could be for all 72 years of their marriage. And in true form she followed Allan’s final footsteps two weeks later, to the moment. Grace Caroline (Jackson) was born to Martha Ellen (Ward) and Robert Jackson in Montreal, QC. Grace and Allan were married in Montreal and lived their lives in Montreal, northern Ontario, Toronto, and Beaconsfield, retiring to Burlington, Ontario.

Grace was a kind and caring mother to her daughter Susan (Dolliver) and son Bruce, and had much fun with her daughter-in-law Biz Agnew. She was the proudest grandmother ever of her two grandchildren Ellen and Claire. They were so lucky to spend so much time over so many years from infancy to adulthood with their grandma looking after them, baking cookies for them, and loving them unconditionally. Grace is predeceased by her sisters Edith and Frances and her brothers Guy and Bruce, she remained very close to her sister Joan (Turpin) and brother Ron.

Grace was very sporty, skiing as a teenager in the Laurentians and Eastern Townships. She loved to swim, and she played golf (got a hole-in-one!), tennis, badminton and curled. She loved to travel too, and often reminisced of her days skiing in Montreal or traveling in Europe. However, there was one thing Grace was most widely known for, and that was her culinary excellence. Whether family, friends, or the friends of her children, everybody loved having a meal cooked or a cake or pie baked by Grace; from cheese soufflés to beef wellington, or incredible decorated layer cakes, that to this day nobody seems able to replicate.

Grace was kind, sweet, and loving, now reunited with Allan, where she needed to be.

A private service will take place in September.