To share your memory on the wall of Gery Puley, sign in using one of the following options:

Husband and father for 56 years: Arthur (Art) Cecil Puley. Gery had known Art since she was 5 years old.

Donald (Don) Edward Burgess, also known by the family as “Burgee”, was a longtime close friend of Gery, Art and family since 1945. Don (Burgee) became her legal partner for 14 years after Art’s passing.

Gery grew up in a family of artists and musicians and her involvement in the arts began when she was seven. Her sister, Lila Dicken, was her first mentor in art.

Gery Puley was an active, elected member of the Canadian Society of Painters in Water Colour. In 1984 – 85 she became the President of the prestigious CSPWC. Her work has been exhibited in numerous galleries both nationally and internationally.

Gery’s strong and continued involvement of the above organizations led to her being a Life Member of each.

Arrangements have been entrusted to the care of Smiths Funeral Homes, Burlington. This will be a private family funeral.

There will be a ‘Celebration of Life' at a later date.

She loved her friends and family and she was dearly loved by many. She will be deeply missed by all.

In lieu of flowers, the family has requested that a donation be sent to the March of Dimes who cared for her lovingly day after day in her home.

Details for March of Dimes contributions:

Receive notifications about information and event scheduling for Gery

We encourage you to share your most beloved memories of Gery here, so that the family and other loved ones can always see it. You can upload cherished photographs, or share your favorite stories, and can even comment on those shared by others.

Posted Aug 09, 2020 at 08:53am
Don and Ken...so sorry to learn of the passing of your mom...thoughts and condolences are with at this challenging time
Comment Share
Share via:
BT

Posted Aug 05, 2020 at 08:13am
I feel as though dear Gery is here with us now and will continue to mentor those of us who were lucky enough to know her. I know that she is in a better place but at the same time, I feel her presence so strongly. I hope that she continues to inspire and encourage us, from above. She was an amazing woman and artist!!

On behalf of the Central Ontario Art Association, I send our heartfelt condolences to our dear Rayne and the rest of Gery's family on the loss of such a fine woman. Sending virtual hugs along with prayers...
Brenda Behan Turnour,
Past President of COAA
Comment Share
Share via: 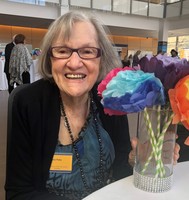