To share your memory on the wall of Freda Ramage, sign in using one of the following options:

Print
It is with great sadness we announce the peaceful passing of Freda Gladys Ramage (nee Huehn) at her home in Burlington, Ontario on Sunday, April 26, 2020, in her 94th year.

Freda is survived by her beloved husband of almost 72 years, Bi... Read More
It is with great sadness we announce the peaceful passing of Freda Gladys Ramage (nee Huehn) at her home in Burlington, Ontario on Sunday, April 26, 2020, in her 94th year.

Freda is survived by her beloved husband of almost 72 years, Bill, and their children David (Jocelyn) of Burlington, Ontario, Stewart of Jasper, Alberta, Sheila (Sheldon) of Burlington and Rob (Crista) of Guelph. She is lovingly missed by her grandchildren Scott (Stephanie), Cheryl (Ricardo), Douglas (Heidi), Gordon (Annoncia), Robert (Michelle), Ailie (Eric), Ken, Noah, Maya and Zac, as well as two great-grandchildren, Finley and Vaughn. She was also a treasured part of the lives of her nieces and nephews across the continent, with their common roots in Winnipeg.

Freda was predeceased by her father, Charles and mother, Agnes (nee Bancroft) and six sisters, Anne, Viny, Florence, Violet, Lila and Ina. Sharing in the sadness of the loss are her brothers and sisters-in-law Eileen Ramage, Calvin Skagfeld, and Margaret & Percy Criddle.

Her grandchildren remember her as a gifted artisan who quietly worked on her needlepoint, sewed magical dresses with puffy sleeves, or worked together with them on crafts. She might meet them in the kitchen at three in the morning to sneak a snack. She loved being around her family, so she would bring them together for Sunday night dinners, preparing her specialty of roast beef and Waldorf salad. When leaving, Grandma Freda would give her grandchildren a tender squeeze of love and, sometimes, a small tear would flow because she didn’t want to say good-bye.

As the fifth of seven girls raised on a farm in Miami, Manitoba, Freda was introduced to hard work and ruthless chores from a young age. She was brought up with a fearless determination where gender had no boundaries, and she could do “whatever the boys could do”. She had a pet rooster and a baby lamb, and she was driving the tractor at 14, stretching her legs to reach the pedal.

Freda went to a small, private business college where she became a master of typing & stenography, and she worked for a real estate lawyer who helped Freda, and her dashing new husband, Bill, find their very first apartment in Winnipeg. Introduced by Bill’s brother Don, they were married in 1948. Freda and Bill raised their family in Winnipeg until 1961 and then built their life in Pointe-Claire, Quebec until 1996 when they went to Burlington to spend their retirement years. Freda had an eye for aesthetics and took great pleasure in design, whether it was sewing clothes for her children and neighbours, or designing a home that displayed the latest trend. They had a tight group of friends in Pointe-Claire with whom they raised families, travelled and threw great parties.

Freda’s greatest treat in her retirement with Bill was the presence of her children and grandchildren, making sure there was a warm and inviting home always ready to receive them.

Supporting Freda in the later stages of her life, sincere thanks go to Brenda Maddalena of the LHIN and appreciation to the staff of Emma’s Neighbourhood (The Village at Tansley Woods) for their daily dedication during these times. Donations in lieu of flowers may be gifted to Burlington’s Joseph Brant Hospital Foundation.

After pandemic protocols are lifted, friends and family will gather for a celebration of Freda’s life.
Read Less

Receive notifications about information and event scheduling for Freda

We encourage you to share your most beloved memories of Freda here, so that the family and other loved ones can always see it. You can upload cherished photographs, or share your favorite stories, and can even comment on those shared by others. 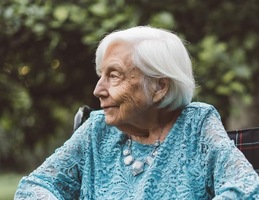