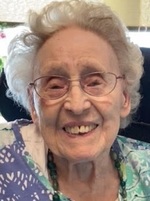 She was Italian! Her lineage was Sicilian, with her parents coming from Racalmuto, Sicily. Please don’t call her Nonna! She was proud to say she had quit drinking wine at the age of 11. She was often complimented on her beautiful skin which she attributed to olive oil, even at over 100! Born and raised in Hamilton, she grew up on John Street North in Hamilton’s Little Italy where her grandparents lived across the street and aunts, uncles and cousins lived in the surrounding areas. Speaking only Italian, she learned to speak English when she attended grade school. She was born as the 1918 Spanish Flu arrived in Canada, the First World War was ending; she lived through the era of the 1929 Great Depression and through the 1939-1945 Second World War; and now the 2020 Covid-19 Pandemic. There is a Hamilton Spectator photo of Frances with her girlfriends standing in front of S.S. Kresge Co. holding the Hamilton Spectator up with the May 1945 headline “Nazis Quit”! She was employed at the former Firth Bros Ltd. in Hamilton as a seamstress for many years as well as the Eaton’s factory in the late 1930s and 40s. Frances, her girlfriends and young sister would hitchhike home after a day on the beach in Port Stanley. She was ahead of her time marrying and starting a family later in life.

A life time member of the Catholic Women’s League, Frances was an avid knitter and quilter with everyone in her family receiving at least 2 quilts each if not more! In her younger years she did fine crochet work and linen cutwork. She was a gardener and loved her garden with mums that flowered well into November. There were many summers of her canning the proceeds of her garden. She also was the family seamstress. Somewhere in between, someone wanted a little sister and 2 foster children came to be part of the family because of mom. She was the Saturday baker with enough pies, pizza, cupcakes, bread, cookies to last the week. And her famous fruit cake! An annual tradition until she stopped baking in her mid eighties. Frances was an analytical thinker, our fact checker and historian, with the memory of an elephant. A breast cancer survivor of over 30 years, she loved to walk and did her daily walks along the halls of Burlington‘s Heritage Place Retirement Residence where she lived the life of a Queen for 12 years! At 99 she made the decision to move to LTC and Burlington’s Brant Centre became her new home. She was very cognitive, lived in the very present and read her newspaper daily; playing Cribbage and Scrabble with her family during Holiday dinners, playing her last game Christmas 2019 and celebrating her 102nd birthday with 4 generations of family before the Covid-19 lockdown was in effect. These family dinners and regular visits had been sorely missed. Even recently, you could ask her anything and she could tell you the story, the directions to a long forgotten street and stories of growing up. She was often tape recorded during those moments. Mom had great sense of humour and got the joke when no one else did. Along with Aldo she traveled across the continent visiting children and grandchildren, camping in the early years, and taking a dream trip to Sicily in 1987 where they visited Racalmuto, her parent’s home town.

She had the most beautiful smile and an infectious giggle. She inspired us. An optimist, full of energy, heart and wisdom, she always saw the positive things in people. A good mom and wife, she was an independent and kind person and an animal lover, especially cats. But please DO NOT swear! She loved having her hair done every 2 weeks and always wore a necklace. Frances’s favourite foods were pizza, wings, ribs and chocolate and she loved snacks. She would get very excited when these were on the menu. Her favourite colour was all shades of blue. Heartland, Schitt’s Creek and Hockey were her favourite TV shows! What person would have cataract surgery at the age of 100? Mom, of course! At the age of 100 she was prescribed cannabis pills (medical marijuana before it was legalized!) for joint pain. She chuckled and giggled over this, and surprisingly had a craving for munchies….finally she understood why people looked forward to the legalization of this. No, she did not smoke joints! ! Frances was everyone’s favourite mother-in-law - an accomplishment itself. She was able to say “I love you” to all of her grandchildren and great grandson in the days before her passing. She left this world having no regrets.

Thank you to Dr. T. Harricharan and everyone on Spencer’s Creek who took very good care of mom. And a special mention to Dr. Paul Lysecki for being in the right place at the right time in April of 2018. That encounter gave mom and all of us an extra 29 months of making memories.

George Carlin’s “Views on Aging”. https://charlesflirts.com/George_Carlin.php
Life is not measured by the number of breaths we take, but by the moments that take our breath away.
Life’s journey is not to arrive at the grave safely in a well preserved body, but rather to skid in sideways, totally worn out, shouting ...” holy sh*t…what a ride!” This has been on Frances’s room wall since she turned 100.
She was 102 and a half years young when she skidded out the door!

Due to the current COVID-19 Restrictions, a visitation will not take place, but a celebration of life will be held in the future. A Funeral Mass will be held at St John the Baptist Church, 2016 Blairholm Ave, Burlington, on Saturday October 3, 2020 at 11 am. In accordance with the provincial regulations, there is a limit to the number of people we can have in the church at one time. Please RSVP on the Smith's Funeral Home website.

In lieu of flowers, donations to the Lindsay Rachel Giacomelli Memorial Fund https://payment.csfm.com/donations/calgaryfoundation/?fund=GIACL or a charity of choice in her memory would be appreciated.