To share your memory on the wall of Filippo Luzi, sign in using one of the following options:

Receive notifications about information and event scheduling for Filippo

You will receive any future notification messages.
Print

We encourage you to share your most beloved memories of Filippo here, so that the family and other loved ones can always see it. You can upload cherished photographs, or share your favorite stories, and can even comment on those shared by others.

We were saddened to hear of the passing of your father this past week. Regrettably, we were out of the city and unable to pay our respects at the funeral home or attend his funeral Mass.
The bereavement process is never easy when a member of one’s family passes away. But it is more difficult when the deceased member is a father -- especially one like Filippo who was beloved by family and relatives, cherished by friends, and respected by all who knew him.
Please accept our sympathies and sincere condolences at the loss of his benevolent presence in your lives.

From: Tony Lo Presti and family

Posted Jul 28, 2019 at 03:48pm
To you and your family Phil,
We are saddened to hear about the loss of your father. Our thoughts and prayers are with you and your family. May he rest in peace. Anna, Vince, Andrew & Danielle Simonetta

Posted Jul 26, 2019 at 09:21am
To the family of Mr. Luzi, we here at Feet First clinic (stoney creek site) of Compass Community Health are extremely saddened by the loss of our beloved Filippo. I had the pleasure of taking care of Filippo as a patient for many years and he was an exceptional person. Filippo was a man of a golden heart for which myself and my colleague will greatly miss him and his presence. Sincere condolences to Filippo's family and friends. - Sonia R. (Chiropodist)
Comment Share
Share via: 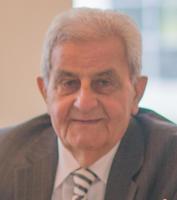