To share your memory on the wall of Dorothy Zehr, sign in using one of the following options:

She was an active member of the Lutheran Church, had a beautiful soprano voice and sang with the Lister Choraleers as well as the church choir for many years. She initiated the formation of the 4th Auxiliary Boy Scout Troop of Stoney Creek. Dorothy was an avid bridge player. She worked as a bookkeeper as well as in real estate for several years.

Her family and friends plan to meet at a later date to celebrate her life. If desired, donations in memory of Dorothy to Grace Lutheran Church in Hamilton or a charity of choice would be sincerely appreciated. (Arrangements entrusted to SMITH’S FUNERAL HOME, BURLINGTON, 905-632-3333).

Receive notifications about information and event scheduling for Dorothy

We encourage you to share your most beloved memories of Dorothy here, so that the family and other loved ones can always see it. You can upload cherished photographs, or share your favorite stories, and can even comment on those shared by others.

Posted Jul 27, 2020 at 07:22pm
To the Vaughn and Zehr family my sincere condolences to you all. She lived a long and full life indeed, and may she now rest in peace. I have so many fond memories of Dorothy Ruth. I first met her and Al in 1986 when I moved to Burlington and became friends with Christine. From that point on they always treated me like part of the family. I was included in any and all family gatherings, they lent a helping hand when needed, and offered a hug, cry, laugh or anything else. Dorothy and I connected on another level as she loved "dolly, yummy" things when it came to clothes, jewelry, home decor, whatever, and I'd always been know for matching everything and enjoying bright colourful things myself. My favourite story is the first time Christine and I had them for dinner in our new home in 1992. I set the dining room table with all my Royal Albert china and even had china place cards in front of the plates. Those place cards were mentioned over and over again as the years passed. We could have served kraft dinner and weiners for all she cared, but presentation was everything! There was also the time I found a purse to match her very colourful patterned jacket for her 70th birthday. The pleasure it brought her still brings a smile to my face. Thank you all for sharing this lovely lady with me. My thoughts and prayers are with all.
Kelly Scott (Walker)
Comment Share
Share via:
MI 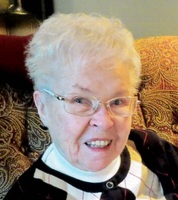