To share your memory on the wall of Christopher Evans, sign in using one of the following options:

Provide comfort for the family of Christopher Evans with a meaningful gesture of sympathy.

Chris was co-founding partner in the family business of Paling group of companies, operating in Hamilton for over 50 years. Long-time resident of Burlington, he will be forever remembered by his remaining family and friends and especially missed by grandson Christopher, great-granddaughter Kyla, and nieces Joan and Judi.

If there is indeed a Heaven, I know Chris and Betty are together dancing the jive at the EI Morocco once again.

Family will greet friends at Smith’s Funeral Home, 485 Brant Street (one block north of City Hall), Burlington (905-632-3333) on Friday, August 23, 2019 from 9:30 am until the time of Funeral Service at 10:30 am. There will be a reception to celebrate his life, following which friends and family are invited to accompany Chris to Chapel Hill Memorial Gardens for interment alongside the love of his life, Betty. In lieu of flowers, donations to Carpenter Hospice would be greatly appreciated.

The song is ended, but the melody lingers on…
Read Less

Donations are being accepted for: BURLINGTON ROTARY COMMUNITY HOSPICE INC..

We encourage you to share your most beloved memories of Christopher here, so that the family and other loved ones can always see it. You can upload cherished photographs, or share your favorite stories, and can even comment on those shared by others.

Posted Aug 24, 2019 at 01:39pm
I am married to
George J Evans Jr. Chris would be my husband’s Uncle. The first time I met Uncle Chris at his mobile home in
Florida over 20 years ago I thought he was such a kind person and along with Aunt Betty they welcomed me into the Evans Family. We had so many laughs at that first visit. I went to Hamilton one year and Uncle Chris personally drove me around Hamilton showing me all the sights of where their family had lived and worked. I had not even done this with my husband! The last time I had dinner with Uncle Chris at George and Sheila’s home along with Christopher was just such a happy occasion. We talked and talked and he didn’t want to leave but it had gotten late. I will never forget Uncle Chris, his kindness and his devotion to his wife Betty.
May he Rest In Peace...
Debby Evans

Posted Aug 22, 2019 at 07:25pm
I had the pleasure of meeting my Husbands "Uncle Chris" several times. A very Soft Spoken man. I had met Aunt Betty during the Christmas holidays in her later years and I was touched by the Love Chris had for her. He was very hands on taking care of "The Love of His Life" I visited his house one afternoon and he brought out photo albums and pictures to share his memories. I know Uncle Chris is where his heart is today, with Aunt Betty. Love to Christopher, his constant companion and to his Nieces that have helped him along the way. May he be at Peace.
Comment Share
Share via:
MS

Posted Aug 22, 2019 at 05:38pm
My name is Mona (Lamontagne) Smith. My father Armand Lamontagne and Antonette (Tony) Beebe were brother and sister. Betty Evans was my cousin and her mother was my Aunt Tony and Uncle Larry.
As a kid my brother Donald and sister Joan grew up visiting and doing things with Betty and Chris who we called Rocky. We had lots of get togethers at my family home in Hamilton and in Ancaster at Betty's mother's home.
A trip as a kid to Oshawa to visit Leodee may not be spelled correctly.
A couple of summers with Leo Paul at a cottage at Turkey Point and another cottage near Selkirk for a weeks holidays. Last time I saw Paul , Chris's son was at Aunt Tony's funeral and he looked a lot like his father.
My sister and I attended Aunt Tony's funeral and Betty and Rocky had everyone to the Old Mill for a meal after the funeral services.

The three of us attended Betty's funeral together and had lots of memories to share with Chris or Rocky. My sister has left today for a holiday and will not be able to attend the service. I will not be attending the service tomorrow.
Lots of great memories of Betty and Rocky as kids growing up. I am 74 now.
Comment Share
Share via: 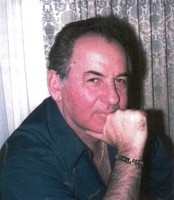