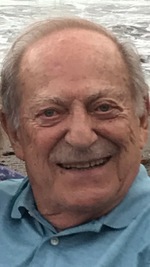 Rosart, Charles J.
It is with great sadness that we announce the passing of Charles (Chuck) Joseph Paul Rosart on October 7th, 2020. Charles was predeceased by spouses Marianne Lubotta and Ruth Ann (Wendy) Welsh. He is survived by sisters Marvel Bogart and Diane Pamenter. Beloved father of Sharyn, Sheila, Suzanne, and Sarah Rosart; father-in-law of Nathaniel Marunas, Peter Brodnitz, and Robert Martin; grandfather of Dashiell and Dexter Rosart-Marunas, Jeremy, Jesse, and Samantha Rosart-Brodnitz; and Rachel and Ava Rosart-Martin. Charles was born on June 1, 1934 in Hamilton, Ontario. He graduated from McMaster University and Osgoode Hall Law School, and was called to the bar of Ontario in 1963. He established a law practice in Hamilton, and went on to build a distinguished portfolio of development properties in Hamilton and environs. Chuck enjoyed a second home in Muskoka for more than 40 years, where the sunsets on Lake Rosseau never ceased to thrill. A voracious reader and lover of music, food, and conversation, Chuck will be remembered for his charm, upbeat nature, and indomitable spirit. A private family service will be held this week, followed by a public celebration of Charles’ life at a later date.