To share your memory on the wall of Barbara Blake, sign in using one of the following options:

Barbara attended a Catholic elementary school and Peterborough Collegiate and Vocational School. To support her mother and two sisters, Barbara taught at Cathedral Girls High School in Hamilton for one year before enrolling at The Ontario College of Education with her BA from the University of Toronto through St. Michael’s and St. Joseph’s Colleges in 1952.

In 1955, Barbara began teaching at the Belleville Collegiate and Vocational School, and, after marriage in 1957, at the Mount Forest District High School with Paul. Moving to Woodstock with Paul in 1958, she made it a condition of marriage that she would not both teach and try to raise a family. With no children forthcoming, she did short term fill-ins at Huron Park Secondary School and Woodstock Collegiate Institute, tendering her resignation each June. Mary was born in 1962; John followed in 1964.

While raising two children, Barbara took an active life in her community. She was a lifelong supporter of the University Women’s Club, becoming President of the Woodstock Club and, later, the Hamilton Club. Barbara was active in the Catholic Women’s League for over 60 years, becoming President of the St. Francis Xavier, Stoney Creek, League. She was a seminal force on the Red Hill Expressway Committee which successfully lobbied for the development of this key infrastructure for the Niagara Region.

For 33 Years of their married life, Barbara and Paul lived in Stoney Creek where they enjoyed the joys of an older home, renovations, a large lot and fruit trees. Barbara, having grown up with rationing during the war, was always canning and preserving; she made great jams and wonderful pies.

After Mary and John left for university, Barbara re-established her teaching career as an English As A Second Language instructor for Hamilton’s newest residents. She loved teaching ESL; her students became her friends, visiting or calling for many years.

Barbara lived a full and active life: physically, intellectually, and spiritually. Barbara, even in her mid-80’s, could be found at exercise or information classes at LaSalle Park Retirement Residence in Burlington.

Barbara Anita (Johnston) Blake died on March 30 at St. Joseph’s Villa in Dundas from Alzheimer’s Disease. Due to the Covid-19 lock down, Cremation has taken place. Barbara’s ashes will be interred at Our Lady of the Angels Cemetery in Stoney Creek at a future date following a Funeral Mass. Her grandson, Deacon Paul Edmondstone, expects to officiate at both.

Barbara’s family, and Barbara, would like to thank everyone with whom she worked and lived with such love and happiness. Her family thanks the staff at St. Joseph’s Villa for their many kindnesses, thoughtfulness and caring over the past nine months. Also, their courtesy to Mary during Barbara’s final days is much appreciated.
Read Less

Receive notifications about information and event scheduling for Barbara

We encourage you to share your most beloved memories of Barbara here, so that the family and other loved ones can always see it. You can upload cherished photographs, or share your favorite stories, and can even comment on those shared by others.

Posted Apr 02, 2020 at 05:09pm
Our condolences to you Paul and your family.I remember the great host that Barbara was as we met each week to go to a special course at O.I.E.S.E in the eighties. The snacks, treats and hospitality were greatly appreciated. My forty-five year old son still remembers being invited to cherry picking at the Blake homestead.You are in our thoughts and prayers! God Bless

Posted Apr 02, 2020 at 10:33am
What a lovely tribute to your mom Mary. Thinking of you, Dan, Tom and Paul at this difficult time.
Francy, Peter, Stephen, Mary-Bridget and Joseph
Comment Share
Share via:
JR

Posted Apr 02, 2020 at 10:14am
Our condolences to Paul and family. Barbara was a fine person and I enjoyed working with her through the ESL program (St. Charles). Our prayers are with you at this time.
Madeline & Joe Ricci
Comment Share
Share via: 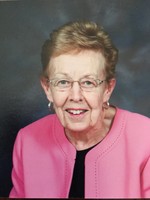