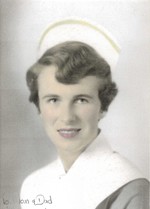 Anita was born in Antigonish County, Nova Scotia. She passed away at Milton District Hospital on May 28, 2019. She will be deeply missed by Donald, her loving husband of 58 years, and her devoted son, Christopher (Donna). She was predeceased by her son Neal (in 2001), and daughter Karin (in 2017). Karin left 4 granddaughters; Casey, Natalie, Michele and Marie, who all live with their father, Steven in Naramata (Penticton area), B.C. Anita also leaves a loving sister, Claire, in New Glasgow, N.S., and many nieces and nephews scattered across Canada, and one in Australia. Anita graduated as a Registered Nurse from St. Francis Xavier University in Antigonish in 1955, and, after a career in nursing, she joined T.C.A. (now Air Canada) as a Stewardess in an earlier era when a "Stew" had to be a Registered Nurse. She loved both careers. Anita and Don met and married in 1960 in Montreal. In the years following, they and their children liven in England, Sweden, Montreal again, West Vancouver, and finally and happily, Burlington, ON. Anita coped beautifully with it all. Rest in peace, dear lady.